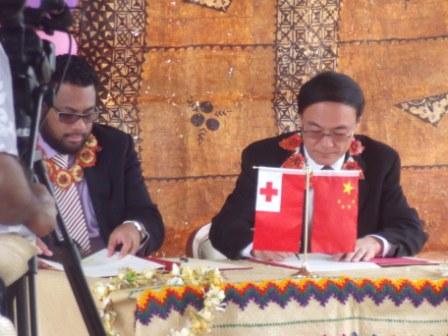 THE donation from the International Department of the Central Committee of the Communist Party of China (IDCPC) to the Legislative Assembly of Tonga as their token of friendly sentiment towards the people of Tonga.

The People’s Republic of China’s Ambassador to Tonga, HE Wang Donghua revealed this when he represented IDCPC in handing over new furniture and office appliances worth over TOP$148,000 to the Legislative Assembly last Friday.

HE Donghua said IDCPC’s donation is their support for improving of the Parliament’s office facilities.

The new office furniture and appliances worth over TOP$148,000 is a grant from IDCPC as a result of a parliamentary delegation visit to Beijing last year, led by the Speaker, Lord Fakafanua.

The tour provided an opportunity for Tonga's parliamentarians to familiarize and learn more about China’s Communist Party and its political system. It was also to foster good relationship between the Legislative Assembly of Tonga and the Communist Party of China (CPC).

HE Donghua said it is gratifying to note there have been increased exchanges between the International Department of the CPC and the Parliament of Tonga in recent years.

“That helps them learn a lot about the Chinese political system and the economic development so Tongan MPs are in a better position to have a better picture about China… I think these exchanges have enhanced the bilateral and the mutual understanding between our two countries,” said the Chinese Ambassador to Tonga.

The Speaker of the House, Lord Fakafanua expressed gratitude for the great contribution from China.

“We are deeply honored to receive this gift and believe it will motivate the staff to work more efficiently and also to improve quality legislative service,” said the Hon. Speaker.

The office supplies include desks, chairs, office cabinets, photocopier and other electronic appliances among others.