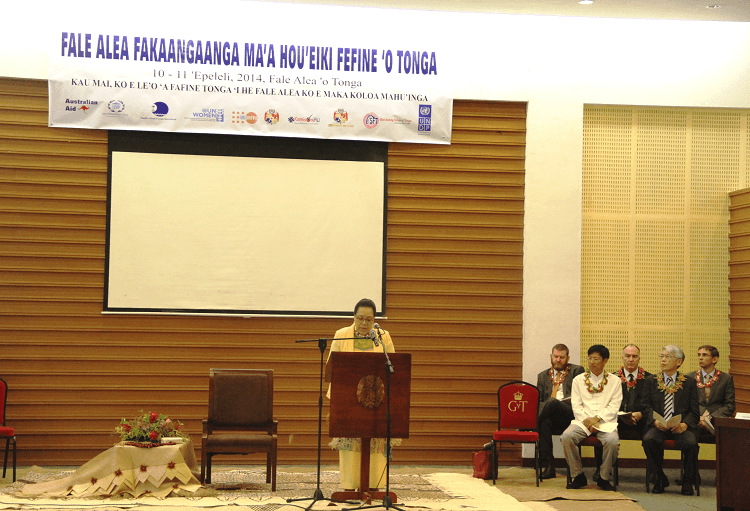 HER Majesty Queen Nanasipau'u this morning challenged participants of the first ever Practice Parliament for Women of Tonga that being a leader is not an easy task and can be an uphill struggle at times.

However giving women the opportunity to lead people in any capacity is a tremendous privilege and responsibility.

Queen Nanasipau’u Tuku’aho revealed this when she officially opened the Practice Parliament for Women of Tonga at the Fa’onelua Convention Centre this morning.

In her keynote address Her Majesty stated that this is indeed a historical day for the people of Tonga but in particular, it is a joyous day for the women of Tonga.

She stated that over the past 30 years, there has been slow  progress in efforts to increase women’s participation at the highest level of national decision-making. So far only seven women have made it into the Legislative Assembly.

The Queen added that Tongan women have long been at the fore-front of our homes, our work-places, our churches and our communities. Hence it is unfortunate that the number of women who have become People’s Representatives has remained minimal.

“I have no doubt that this Practice Parliament will encourage women to be political leaders to step up with confidence. This is an opportunity for women to raise their profile and expose their unique underutilized skills and experience on a national level,” Her Majesty Queen emphasizes.

On that note, Her Majesty stated that today is a crucial milestone and it marks a very positive step forward for Tonga.

The Queen is also hopeful that this Practice Parliament will also showcase our parliamentary institution with its aspirations for a more inclusive and democratic government, as well as its respect for free speech and the rights of the marginalized and the minority.

“It also sends a strong message that Tonga wishes to inspire broad tolerance in thought and expression - all this we consider to be a precious part of our way of life and outlook,” the Queen stated.

Meanwhile in delivering the welcoming speech Speaker of the Legislative Assembly, Lord Fakafanua stated that the weeklong event is an ability to increase the potential of women to become effective political leaders.

“The Practice Parliament for Women serves only to expose, encourage and empower women to achieve their potential as leaders,” the Lord Speaker stated.

However, he puts forward that such efforts need the close collaboration of both men and women.

“We need to approach our future together as men and women working in unity - sharing decision making, equality building and leadership.

Our goal is to foster a multi inclusive and modern Parliament, build Tonga’s sustainable platform – a foundation build on both men and women’s fairly represented,” the Lord Speaker stated.

Ms Akiko also mentioned that UNDP welcomes the opportunity to support Tonga’s decision to take a leading role in this region wide effort to raise the level of women’s participation in the political process.

“It is essential that this half of the population is fully involved in all areas and all levels of the political life of the nation,” Ms. Akiko says.

She also mentioned that this is a fundamental purpose in the work of the Tonga Governance Strengthening Programme, which was established last year by an agreement between Tonga and the UNDP, with financial support from the Australian Government.

The UNDP Deputy Resident Representative also stated two functions that this Practice Parliament for Women serves in the quest for a greater role of women in the Tongan politics.

“Firstly it highlights the fact that here in Tonga there are many women who are already leaders in their communities and possesses the potential to be leaders at the national level. It is part of a process which involved more than 30 meetings and hearings which together with an on-going dialogue on the radio, through social media and on website have helped raise awareness on the issue of women’s participation in political life.

Secondly the event gives participants an opportunity to learn how Parliament works, the roles and duties of its members and how laws are debated and enacted. From then on, have an opportunity to debate important issues in the Parliament Chamber and experience the work of parliamentarians,” Ms Akiko elaborates.

The UNDP representative also pointed out that this however draws attention to the ultimate goal of the process to build the capacity and confidence of potential women candidates before the November election. Thus she is hopeful to see more women making it into politics in future Tongan governments.

Ms. Akiko also reassured the gathering of UNDP’s commitment to continuing working in partnership with the Government especially the Ministry of Women, Parliament, Civil Society Organizations and other key stakeholders to ensure that women’s participation remains central to the development agenda in Tonga,” according to Ms. Akiko.

In her keynote address the Queen also congratulated all the participants who have been selected as successful candidates for this first Practice Parliament for Women in Tonga 2014.

I am indeed very impressed with the combination of women representatives to this Practice Parliament and I am confident that the bills, motions and petitions that they will debate will be in the public’s best interests,” Her Majesty says.

The Lord Speaker also mentioned that since taking up his role as Speaker it was his intention to have a Practice Parliament. He added that they started off with nothing but a concept and fortunately in Tonga there was a lot of support on issues of gender equality and the empowerment of women.

On that note he greatly acknowledged the Practice Parliament’s partners including the Australian Aid Programme, Inter Parliamentary Union (IPU), UNDP and other partner agencies with their unwavering support in making such event possible.

Lord Fakafanua also thanked the Clerk and the Secretariat for their great effort in preparation of the event.

The opening programme also marked the beginning of three day training for the selected candidates to know more about the works of Parliament before the actual Practice Parliament on Thursday and Friday April 10-11th at the Legislative Assembly of Tonga’s Chamber.