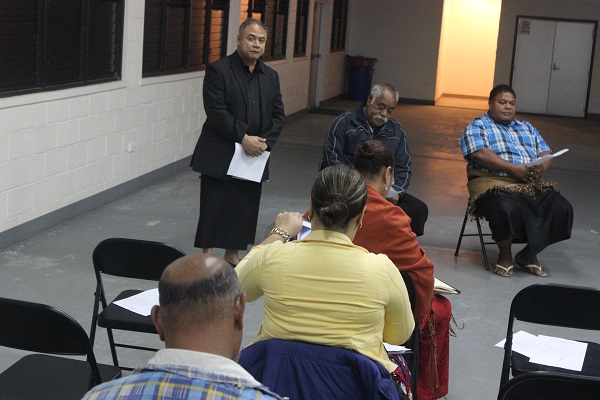 NEGOTIATION at the government to government level was initiated in the previous administration with Australia over Tonga’s concern on deportees reoffending in the kingdom.

The Speaker of the Legislative Assembly Lord Tu’ivakano made these comments at Te’ekiu during Tongatapu 5 MP first parliamentary constituency visit meeting on Wednesday night.

His remarks came when a Te’ekiu resident called for a legislation to avoid deportees deported to Tonga after they committed serious crimes overseas.

“The concern is with regard to deportees sending back to Tonga and reoffend here. Is there a legislation to safeguard the community from their criminal behaviour” said the concerned Te’ekiu resident.

Lord Speaker said the matter can be taken up by the Minister of Foreign Affairs at the government to government level talks with overseas countries.

Most of the deportees are sent from New Zealand, Australia and the United States.

A similar concern was also raised during a recent parliamentary visit meeting with the Ministry of Police.

Tongatapu 9 constituency MP Penisimani Fifita said deportation of Tongan born after committing crimes overseas is a concern. The question he raised is why they are deported when rehabilitation should take place in countries they commit the crimes.

The Hon. Minister of Police, Pohiva Tu’i’onetoa pointed out, they are still Tongan citizens and the actions of those countries is proper to deport Tongan born offenders to the kingdom.

Fifita also maintained their criminal and influential behavior is also a burden to Tonga.

“They are being sent to Tonga after committed crimes overseas. With their bad behavior they influenced the locals. One incident involved stealing of pigs at Tatakamotonga and the suspects got away in a rental car.

Police traced the car to two female deportees who used the rental car as a getaway vehicle. Here in Tonga we only expect males to steal pigs not girls! That wasn’t our expectation,” said Tongatapu 9 MP.

Police Commissioner Steve Caldwell said the deportee issue is common serious problem in the Pacific. It is one of the challenge faced by the ministry but it’s beyond Tonga Police jurisdiction to address it.

Deputy Police Commissioner Pelenatita Fe’ao said it’s for MPs to talk at the government to government level for rehabilitation of deportees overseas instead of sending them to Tonga.

Up to three percent deportees are reportedly reoffend here in Tonga. Fe’ao said it’s only a few that recommitted crimes and not all.

Fe’ao said New Zealand and the United States government always notify Tonga Police when a deportee is sent to Tonga.

“These countries always contact Tonga Police with the flow of information on deportees as part of the monitoring process. We receive IDs and criminal history before a deportee gets here in Tonga,” explained Mrs Fe’ao.

According to police report, Australia is a problem as they receive no information from them at all.

The effort is to ensure they become good abiding citizens in the society.