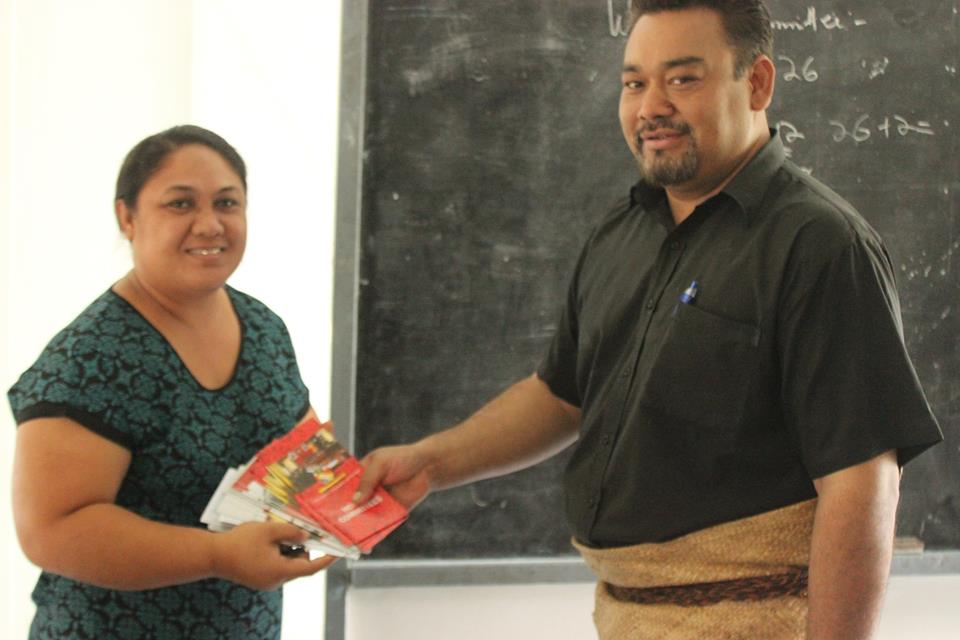 Education Officer, Manase Foukimoana presenting brochures on Parliament to one of Tonga Side School, TSC teachers

THE parliamentary outreach program for 2017 kicks off in Tongatapu this week.

It is the continuation of imparting information on Parliament to secondary schools a project which was implemented in 2010.

Its purpose is to update students on Tonga Society and Culture (TSC) and Tongan subjects with the correct and updated information on the legislative work.

Young pupils mostly in form two were taught on what Parliament does, its roles and functions. They were also briefed on the legislation process, the three arms of Government in which Legislature is one. 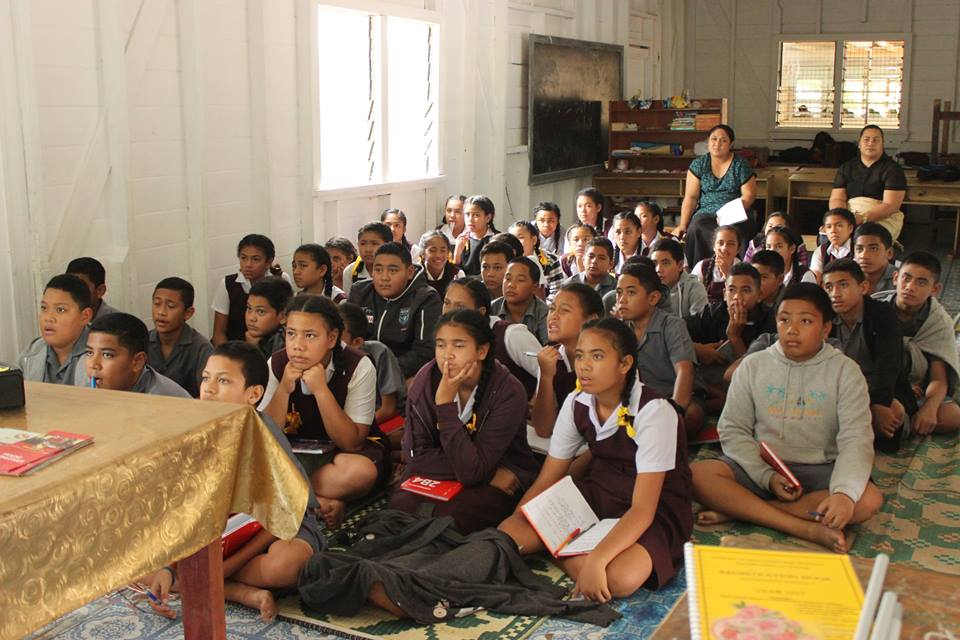 Students’ even teachers were also updated on the old and the new political system of Tonga which was implemented in 2010.
Under the new system, the Constitution remains the supreme law of the country and the three branches of Government includes the Executive (Cabinet), Legislative Assembly and Judiciary.

The Executive serves to enforce the law enacted by Parliament. The Legislature is the law making body and Judiciary is the body that interprets the law.
On Monday, the Education Team conducted an awareness programme at Queen Salote for forms one to four and seven form students undertaking Tongan and Tonga Society and Culture (TSC) subjects.

Seven form students were also a part of the program for their Internal Assessment (IA).

Yesterday Tonga Side School form two students had a chance to learn more about the Legislative Assembly of Tonga.

Speaking to form two pupils, ‘Alipate Makaua, aged 12 of Houma before the program starts, he says Parliament is a law making body and its Members include the Prime Minister and its Cabinet.

However, he learned more during the awareness programme that Parliament not only comprised of Cabinet members but Noble and People’s Representatives as well.

12 years old Divya Darshini is an Indo Fijian national who now studying in Tonga was also happy to learn more about the Parliament of Tonga.

After the first session, Tu’amoheloa Salt again of Houma says he learns more about the legislative process and how the Parliament works now.

Meanwhile TSC teacher Lolohea Vaka who is teaching TSC for the first time shares, the program was educational and enriching in the sense more information are being provided for students and teachers as well.

Vaka says the visual aid of a video presentation on the legislative process, roles and core functions of Parliament was very informative too.

The total number of MPs in Parliament is now 26 which is the 9 Nobles and 17 People’s Representatives elected Members. With the additional role of Parliament in appointing the PM, PM elects his Cabinet Ministers and it must not exceed 12.

In the TSC textbook, the totality of the Cabinet is correctly stated as opposed to the number of People and Noble Representatives. The information provided in the textbook is still wrong. 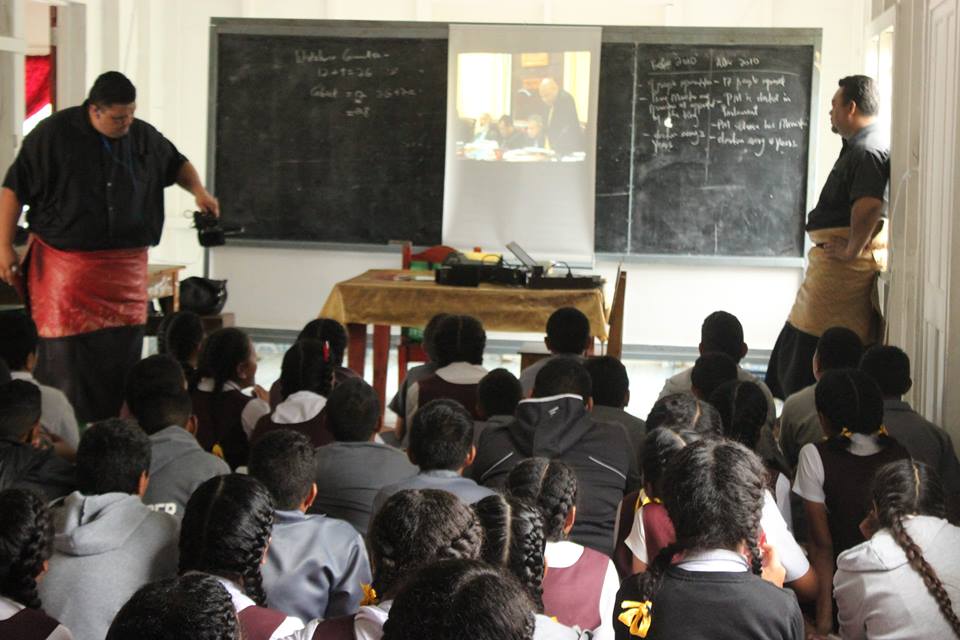 Vaka mentions that names of new electoral MPs are changed in marking of the TSC exams, but answers on the political changes must be in the old structure of government. This is because the TSC syllabus section on Parliament is yet changed.

She adds in marking the TSC exams, teachers are being advised to stick to answers provided in the answer booklet. In that sense it is rather confusing to students.
It was very clear from the program young pupils are being updated with the correct information on the recent political changes yet TSC syllabus is not yet updated.
The parliamentary Education Unit was established in 2010 to provide accurate and updated information on Parliament after it was brought to the Legislative Assembly Office’s attention, students are being taught wrongly.

A political reform took place in 2010 yet the Ministry of Education syllabus on Parliament was not updated. 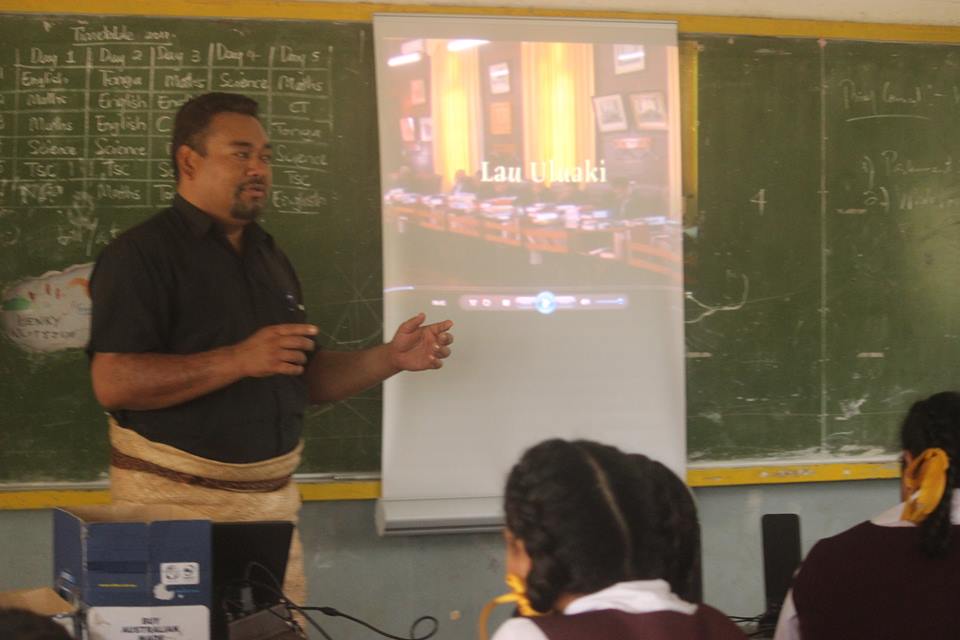 Mr. Foukimoana talking to students about the Bill process