“We are all leaders in this room” – The Hon Francesca Semoso OBE, MHR, Deputy Speaker, ARB, PNG

Sixty women from 17 Pacific parliaments including Tonga met in Honiara from 25-28 September for the fifth Pacific Women’s Parliamentary Partnerships (PWPP) forum. The forum took place with the invaluable support of the Solomon Islands Parliament including logistical assistance from the Parliament’s secretariat and arrangements made by staff of the Australian High Commission in Honiara. Vava’u 16 MP, ‘Akosita Lavulavu represented the Legislative Assembly of Tonga at the Honiara meeting.

The forum was coordinated by the Australian Parliament’s Parliamentary Skills Centre, with the financial support of the Australian Department of Foreign Affairs and Trade’s Pacific Women Shaping Pacific Development initiative. 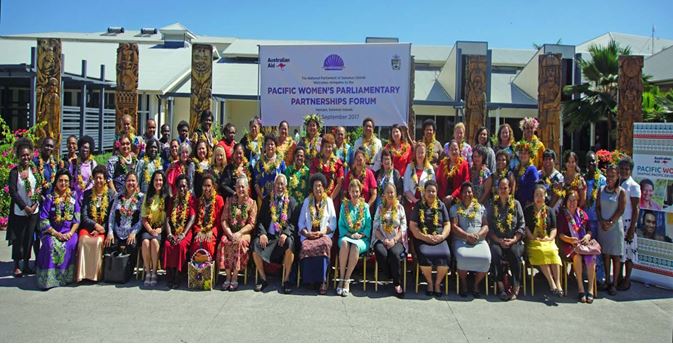 The fifth forum built on the previous four forums which have been an annual networking and professional development opportunity for Pacific women parliamentarians. Participants reaffirmed that the PWPP forum affords women parliamentarians and candidates a supportive space to candidly share their diverse experiences and stories, to find common ground and friendship, to develop direct mentoring opportunities, and to encourage and inspire each other to continue their work. All participants reinforced the value of the forum and expressed their deep appreciation for ongoing Australian government funding.

A welcome reception was hosted for the group by the Hon Freda Soriacomua Tuki MP, Minister for Women, Youth and Children’s Affairs, Solomon Islands.

The Hon Aijilon Jasper Nasiu, Speaker of the Solomon Islands Parliament, officially opened the forum reinforcing the commitment of his country to the advancement of women.

An opening address was delivered by the Hon Jane Prentice MP, Assistant Minister for Social Services and Disability Services in the Australian Federal Parliament, who said that while male dominance exists in every country, every decision of government will be improved by a legislature that reflects the community and has female members, and female Ministers making high-level decisions. Every time a woman runs for office, regardless of the result, the community becomes more convinced of the value of women’s leadership.

A plenary address was given by the Hon Dr Jiko Luveni, Speaker of the Fijian Parliament who spoke of progress following the 2014 election in Fiji with 8 out of 50 seats won by women, the most ever. Four of the five elected women on the government side were appointed as Ministers and Assistant Ministers. The Hon Dr Jiko Luveni became the first woman Speaker and the Hon Ro Teimumu Vuikaba Kepa became the first woman leader for the opposition for the Fijian Parliament. The Fijian Parliament has a range of initiatives in place to support gender equality, including a gender parliamentary focus group, women panelists in the popular Speaker’s debate with the public, and ‘Meet the Speaker’ visits to the community.

The forum highlighted the critical importance of the sustainable development goals (SDGs). As the Speaker of the Cook Islands Parliament, the Hon Niki Rattle, said introducing the climate change session, “women live the SDGs – they impact on our lives and cannot be separated. They are linked and strengthen every aspect of our lives.”

Women shared how good leadership involves demonstrating concrete achievements, knowledge of laws and policy, and confidence. One session focused on the issues surrounding temporary special measures (namely, having reserve seats for women), such as in the Bougainville House of Representatives. There was discussion around the importance of electoral reform, the need for accurate and transparent electoral rolls and the integrity of the election process which engaged delegates from across the region.

Women candidates from the recent Papua New Guinea election shared their lessons learnt. Deep concern was expressed at the fact that no women were elected, despite the fact that 167 women candidates contested 111 seats. They reinforced how important it is to be persistent in politics: “if you don’t succeed the first time, you don’t give up.” It is critically important that every country has an accurate electoral roll and conducts free, fair and transparent elections.

The forum had four topics for small group discussion. These covered themes explored throughout the forums’ five year history. Participants were asked to report back to the plenary with four main points for each. These form the basis of the following agreed priorities for Pacific women parliamentarians.

“Eliminating violence against women is a government policy and is everyone’s business” – The Hon Freda Soriacomua Tuki MP, the Minister for Women, Youth and Children’s Affairs, Solomon Islands

“The profitability of women’s enterprise matters” – The Hon Dr Jiko Luveni, Speaker of the Fijian Parliament

“You can’t wait for foreign aid, use your own budget for local ownership of adaptation and mitigation measures’’ – The Hon Tangariki Reete, MP, Kiribati Parliament

“If something doesn’t happen then regroup and re-strategise” – The Hon Dr Jiko Luveni, Speaker of the Fijian Parliament

The forum reaffirmed the importance of increasing the number of women elected into parliaments as a primary goal. There was unanimous support for the PWPP’s continuation. The women reiterated the value of the forum for establishing and continuing wider networks and mentoring opportunities. It was recognised that the outcomes of each forum need to be included in the consideration of the project’s future. Future forums should open with brief sessions from each country reporting on the status of progress.

The forum participants appreciated the importance of conducting an evaluation five years in to the project and were keen that the forum members are included in the process looking forward. The outcomes from the final PWPP forum must be part of the consideration.

When the program commenced in Sydney in 2013 there was genuine concern that issues for women in the Pacific were not given enough priority internationally. The PWPP is a way that women’s voices, particularly in leadership, will now be heard strongly at home and overseas.

Each forum participant pledged to undertake at least one project from the topic areas covered and report back on this at the next forum. The forum noted that, as part of our international responsibility, that each theme from previous forums and any future forums should detail how the project addresses the sustainable development goals, and helps get women elected to Parliament.