We now await the Electoral Commission's return of the writs of election to His Majesty, King Tupou VI. The writ must be returned on or before the 30th of November 20 17. This date is crucial as it triggers the time periods specified by law for the nomination of candidates for Prime Minister Designate and the meeting to elect the Prime Minister Designate, Speaker of the Legislative Assembly and the Deputy Speaker of the Legislative Assembly.

We will continue to provide information from the Office of the Interim Speaker of the Legislative Assembly of Tonga in order to keep the public informed of the arrangements and procedure for this important event. 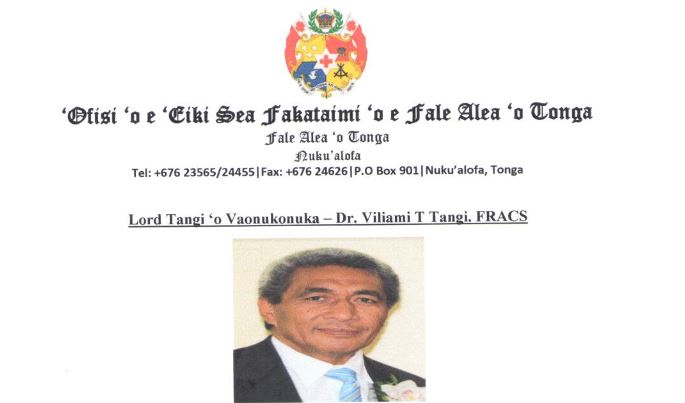 Lord (Dr.) Viliami Tangi is currently the Chief Surgeon Specialist at Vaiola Hospital in Tonga. He graduated from the Fiji School of Medicine in 1973. Dr. Tangi gained the Fellowship of the Royal Australasian College of Surgeons, (FRACS) in 1983, becoming the first Tongan Clinician to gain a Fellowship by examination in any medical discipline. Dr. Tangi was appointed Minister for Health, Tonga in March 1999, a post he held for the next eleven and a half years. He was appointed directly from the clinical settings and Dr. Tangi bas worked as a surgeon specialist in New Zealand, Australia, and Niue but mostly in Tonga.

He was also appointed Deputy Prime Minister, Tonga, in May 2006 for four and a half years and Acting Minister for Police, Prison and Fire Services for two years. During these years, Tonga's Ministry of Health went through major reform involving all areas of works with strong emphasis on Human Resource Development, Health Care Financing. Infrastructure Development and Health Information systems.

Dr. Tangi was a member of the Executive Board of WHO in 2005-2007. Currently, he is involved in capacity building of young doctors both locally and in the region. He is a Senior Clinical Advisor to SSCSiP, an AusATD funded project in Strengthening Specialised Clinical Services in the Pacific. He is also a member of the Scientific and Technical Expert Group (STEG) which provides advises to the Public Health Division of the Secretariat of the Pacific Community (SPC). Dr. Tangi is the President of the Pacific Islands Surgeons Association (PISA) and in 2016. became a member of the Global Health Committee of the Royal Australasian College of Surgeons.