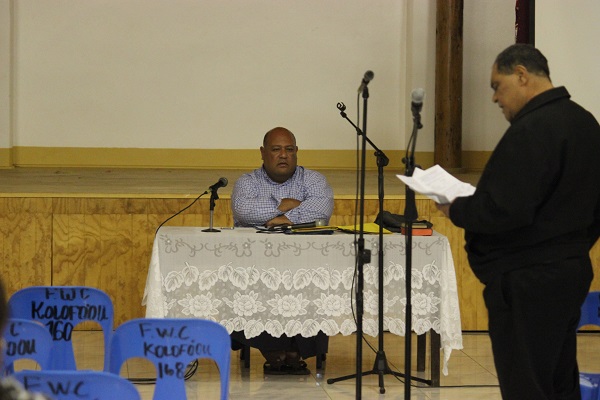 Tongatau 2 MP constituency meeting with electorates of Kolofo'ou and Fanga

Tongatapu 3 constituency MP Hon. Siaosi Sovaleni who is also Deputy Prime Minister told more than 30 attendees at the Ma'ufanga meeting at Fakana’ana’a Hall – the 2019 upcoming event is a good sports investment for Tonga and our future generation.

Earlier, some concerns were raised with regards to government’s proposal to raise money for the Pacific Games by increasing airport Departure Tax from $65 to $165. This was recently approved by the Legislative Assembly and also a one seniti levy on foreign currency exchange transactions.

The Deputy Prime Minister clarified the one seniti levy on foreign currency exchange transactions is not charged in every transactions but will be collected from the banks’ and money operator’s profit margin.

Meanwhile former Police Commander Taniela Faletau told a meeting with their electorate MP, Hon. Semisi Sika at Kalofiama Epworth Hall - Kolofo’ou, the public should think of the 2019 Pacific Games but it is a good initiative for Tonga.

“The public should not think about the expenses incurred but a good investment for Tonga. The levy imposed is only for a short period of time but very beneficial to the country in the long run.” explained Mr. Faletau

Another Kolofo’ou male resident also supported the initiative saying the investment will further boost young people’s talent in sport. For that reason, the concerned Kolofo’ou resident said Government should seek donor funding to build the much needed sports facilities.

“I really supported the sporting initiative …it was shocking to learn our Tongan sports team did well in the Papua New Guinea Pacific Games. Whatever the plan is construction of sports facility is needed for use and preparation by athletes in the upcoming game,” said the Kolofo’ou resident.

The Ma’ufanga attendees also learnt some of the challenges Government had faced in preparation for 2019 Game.

“Government is seeking possible donor funding from China’s aid under the Tonga High School phase two bilateral assistance for construction of a gymnasium.

Building a bigger golf course is another challenge. The Deputy PM said Government is looking into donor funding for construction of a bigger one. Government’s only hope now is to extend the existing golf course into the Fanga’uta Lagoon,” explained Hon. Sovaleni.

Government needs $133m for construction of the much needed sports facilities. $40 million is from the levy collection. Levy on departure tax will generate 8 million annually.