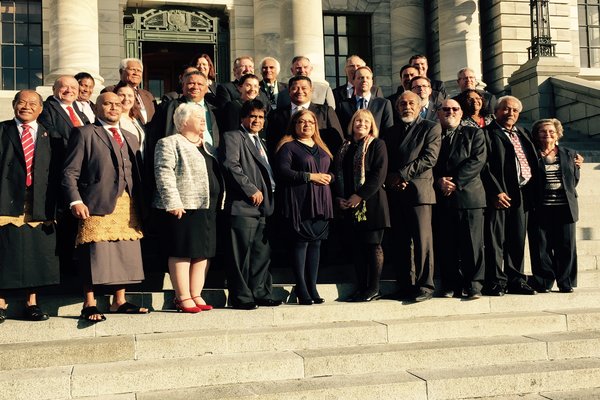 A recent meeting in New Zealand has recognised Parliament as a key institution to safeguarding and upholding the rights of citizens and its corresponding role in the promotion and protection of human rights.

Participating Commonwealth Pacific Parliamentarians attending the ‘Pacific Regional Seminar for Members of Parliament on the Role of Parliamentarians in the Promotion and Protection of Human Rights’ recognised this during a two day meeting in Wellington on July 30-August 1, 2015.

The participants also made a commitment to a set of actions to promote and protect human rights.

Tongan MPs Samiu Vaipulu and Lord Fusitu’a represented the Legislative Assembly of Tonga at the meeting.
The forum also noted the concerns stated by the Pacific small island states Tonga included on the impact of climate change on their economic, social and cultural rights.

Vaipulu reported that MPs also recognised the leading role that Parliaments could play in ensuring the implementation at the national level of accepted recommendations made under the Universal Periodic Review and by other human rights mechanisms.

It also emphasised Parliament’s responsibility for integrating international and regional norms and standards in national legislation and holding governments accountable for the enforcement of laws.

The Wellington meeting also understood Parliament’s unique position to influence policies and budgets at the national level, monitor policy implementation programmes at local levels, address the needs and concerns of their constituencies and act as a catalyst in the realisation of human rights at all levels.

“We note the Paris Principles and the significant role that national human rights institutions can play in promoting and protecting human rights and fundamental freedoms and in developing and enhancing public awareness of those rights and freedoms.

We note the Belgrade Principles and their guidance on the relationship between Parliaments and national human rights institutions,” according to the Wellington statement.
MP Vaipulu also mentioned that the Wellington meeting also acknowledged the importance of active engagement with international human rights mechanisms, including the Universal Periodic Review, the Treaty Bodies and the Special Procedures mandate holders,

2. To advocate for human rights principles to be reflected in new laws, addressing gaps in existing legislation where necessary;

3. To advocate for the integration of human rights education into curricula at institutions of learning, and to strengthen it where already in place;

4. To seek to establish a suitable Parliamentary forum to promote human rights and fundamental freedoms;

5. To proactively seek and avail ourselves of international technical assistance, such as from the Commonwealth Secretariat, in the field of human rights where necessary;

6. To promote both the establishment of Paris Principles-compliant national human rights institutions and the need to strengthen the independence and sustainability of existing ones;

7. To encourage all relevant stakeholders to promote and enhance cooperation between their national parliaments and national human rights institutions and civil society in the promotion and protection of all human rights and fundamental freedoms;

8. To encourage dialogue and promote the exchange of information and experience on salient human rights issues and challenges in the Pacific, including equality and non-discrimination, climate change, indigenous peoples’ rights, corruption, and violence against women and children;

9. To take appropriate steps to increase our engagement in the reporting and implementation process of international and regional human rights mechanisms, including the Treaty Bodies, Universal Periodic Review and Special Procedures;

10. Where appropriate, to build the role of sub-national Parliaments in promoting human rights principles and engaging with national human rights institutions and treaty and Charter-based mechanisms.

11. To support the establishment of the Commonwealth Pacific Parliamentary Human Rights Group, a network of advocates and lawmakers to promote inter-parliamentary co-operation with a view to ensuring better practices and strengthened parliamentary engagement with the Universal Periodic Review, Treaty Bodies and Special Procedures and the durable implementation of their recommendations; enhanced interaction between parliaments and NHRIs; operationalisation of this Declaration; and strengthened efforts to promote and protect human rights.